This attractive piece from the collection of the School of Physics and Astronomy is a differential hygrometer, an instrument used for measuring the humidity of the air.  The dedication plaque on the box announces that it was presented to Charles Piazzi Smyth in 1836.  Piazzi Smyth (1819-1900) would later serve as the Astronomer Royal for Scotland from 1846 until 1888, but at this time he was just 17 years old and working at the Royal Observatory at the Cape of Good Hope as an observatory assistant.

Hygrometers were an important part of an astronomer’s tool kit as they allowed one to calculate the dew point, the temperature 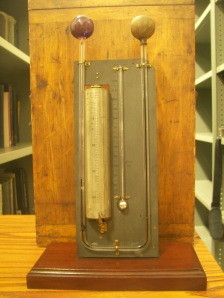 at which moisture condenses out of the air, leaving it clearer.  This allowed for more accurate and precise observations of stars, the light from which was otherwise distorted by refraction in the atmosphere.  This one probably worked by measuring the difference between the outside temperature, on the standard thermometer, and the temperature recorded on the u-bend thermometer.  This latter reading was attained by keeping the cloth over one of the bulbs wet; the evaporation of the moisture would lower the temperature, and the difference would allow the user to determine the relative humidity of the air by use of a set of tables.

The hygrometer was made by Adie and Sons, Edinburgh, prolific manufacturers of scientific instruments. It is likely that this instrument travelled with Piazzi Smyth to South Africa, and may have been used on his local expeditions around the area.  The two carry handles on the box suggest that it may have been intended to be portable, implying an untold story of a roving instrument used by an astronomer who frequently travelled beyond the confines of the observatory.  How it ended up in Leeds is still uncertain, but, as Piazzi Smyth lived quite close to Leeds during his retirement in Ripon, it is possible that it was either acquired by a member of staff when his possessions were auctioned off after his death, or even presented personally to the department back when it was still part of the federal Victoria University.

UPDATE: You can view the finished video on our YouTube channel here.