A couple of years ago we, the museum group, collectively put together a case of objects designed purely to show of the diverse range of artefacts our university holds for the exhibition Hidden Histories.  Everyone chose an object, wrote a blog post, filmed a youtube video and wrote a label.  Put together and it gave a hint of our interests and knowledge, of how objects might lead you to interesting questions, and how varied yet largely uncelebrated was the University’s history.

That was two years ago.  Now the team has changed, and our knowledge of the collections has grown.  Also, for conservation reasons and to keep people looking at the case, its time for a revamp.  As before, everyone is choosing an object and writing about it.  Research has begun.  Here is my contribution.

Perhaps not the most promising display item you might think, but these two, both from school classrooms in the late 19th-early 20th centuries, are pretty beautiful I think.  The first:

The Poggendorff Cell nicely shows the basic workings of a cell.  Its comprises a glass bottle and electrodes.  When working it would be filled with dilute sulphuric acid saturated with potash bichromate which for obvious reasons have been removed for display purposes.  The electrodes are made of carbon (+) and zinc (-).  It was invented by Poggendorff in 1842 and if you’ve ever made a ‘battery’ (or more accurately a cell) from a lemon or a potato then you can probably work out how it works.  When the electrodes are lowered into the acid, the positive electrode attracts ions in the acid, combines and releases electrons which are then attracted to the negative electrode and so it goes on.  The flow of electrons is electricity. 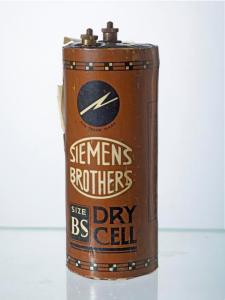 Came along a little later than the Poggendorff cell but works on a similar principle except that it uses a paste instead of liquid acid.  Although this Siemens Brothers dry cell looks rather large to us, it is otherwise very similar to the ones we all have running various gadgets in our homes.

From a safety point of view, you can see, when you look at the Poggendorff battery why many people were apprehensive about allowing electricity into their homes in the early days.  The first homes to install electric lights and so on did so in the 1880s.  By the 1950s there were still homeowners who didn’t trust it preferring to use gas.  For more on this story see our Lights on at Lotherton! collaborative project with Lotherton Hall (on going) based on research by Prof. Graeme Gooday published in his book Domesticating Electricity.

The collection of historical scientific instruments held by the Physics Department at the University of Leeds is eclectic and diverse, ranging from instruments used by William and Lawrence Bragg to a wonderful collection of mechanical calculators and almost everything in between. One of the more obscure objects in the collection is a Siemens Brothers (London) Condenser No. 2 Mark II, now commonly referred to as a capacitor. There is a wide selection of capacitors squirrelled away in the Physics collection and this one would not stand out amongst them but for further information on its provenance.

A large paper label upon the side of this object states this capacitor was tested against standard instruments by the Wireless Testing Department at HMS Vernon, this being somewhat surprisingly not a vessel but a torpedo training school based in Portsmouth. The label is signed and dated although this is very hard to read – the year may be 1905 or 1908 with the latter being more probable. HMS Vernon was also the site of the initial wireless tests done with Marconi wireless apparatus by the Royal Navy in 1899 and hence would play a role in the world’s first commercial wireless contract, between the Marconi Company and the Admiralty.

This surprisingly ordinary object can be used to spin many a tale, of the early development of wireless in Britain or of shared apparatus between cable and wireless telegraphy. But the story I wish to tell with this object is less readily answered – how did this object come to be in the Physics Department at Leeds University? To be sure, condensers were commonly used in Physics teaching and research in the early twentieth century and indeed the Physics Department holds many a condenser. But what I want to talk about when I talk about this object is the transmission of knowledge between the spheres of physics, technology, and commerce. Condensers were an outcome of physical experiments and, through telegraphy and other practical electrical systems, came to be used in a diverse range of technological systems including commercial wireless. And then for some reason, possibly obsolescence, this piece of apparatus is no longer needed and ends up in the Leeds University Physics Department where it is used to teach and possibly form the basic of further experiments used to develop more technologies. And so the cycle of experimentation, innovation, and knowledge transmissions continues.

UPDATED: You can view my short video about the condenser on YouTube here.