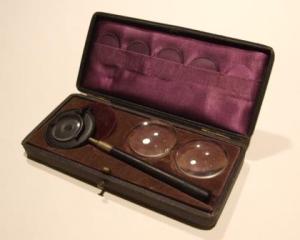 My second object for display is an ophthalmoscope. An ophthalmoscope is a medical instrument, which allows the user to view a patient’s fundus [the back of the eye] through the pupil. Essentially, a light source is reflected into the eye, whilst optical lenses enlarge and correct an image of the fundus.

The ophthalmoscope was developed and made famous in the 1850s by the German physiologist Hermann von Helmholtz. The instrument was quickly and widely adopted into medical practice, although there was also a familiar story of many established doctors being a little reluctant to adopt such new techniques. The design of the ophthalmoscope was modified over time, but its basic elements still remain in place.

In Britain, one of the earliest users and most ardent proponents of the ophthalmoscope was Dr (later Sir) Thomas Clifford Allbutt (1836-1925). Allbutt – who is now most famous for developing the portable clinical thermometer and for possibly being the inspiration behind Tertius Lydgate in Middlemarch – was physician at the Leeds General Infirmary, and tested his new instrument on patients there and at the nearby West Riding Lunatic Asylum. He wrote up his research into a popular 1871 text, On the Use of the Ophthalmoscope in Diseases of the Nervous System and of the Kidneys.

Allbutt developed the ophthalmoscope for use in diagnosing conditions like albuminuria, syphilis, leukaemia and diabetes. Moreover, as the optic nerve at the back of the eye is essentially an outgrowth of the brain, looking through an ophthalmoscope allowed the doctor to begin making judgements on the general condition of the cerebral matter, including that of patients already deemed to suffer from mental illness.

So, diagnosing illness, even madness, by looking inside the eye? I’m going to claim this fits roughly with our ‘hidden histories’ theme. But moreover, the ophthalmoscope is part of the medical history of Leeds. In developing use of the ophthalmoscope and the thermometer, Allbutt worked with the medical instrument makers of the city. Medical suppliers were big business in Leeds [see the Thackray Medical Museum, and Claire Jones’ thesis, for more on that], which is partly why our collections are strong in medical instruments. That’s a point we should emphasise. And finally, if you’re on the Leeds campus, round the back of the refectory you’ll find a blue plaque commemorating Allbutt’s work. Have a wander round the university, there’s interesting stuff hidden all over the place…

[nb. There is no date to go with the specific ophthalmoscope we displayed. It looks like a Liebreich-type model, probably late 19th– or even early 20th century, but I’m not really sure. If anyone has a better idea of what it is, please do let me know.]

Now, I know the Hidden Histories display has already gone up, but I’m still going to do a couple of posts on the objects I chose to put in there. Well done everyone involved, by the way: it looks fantastic. Also, Michael and stars of the screen, the videos are awesome – nice work!

So, here we have a fairly uninspiring piece of 60-year old perspex. But don’t be fooled, because [in my best Professor Brian Cox voice], it’s actually amazing. It’s the ‘liquidity preference function’, from the Mark I model of the Newlyn-Phillips machine, a famous hydraulic computer in which water was used to represent the flow of money through an economy. 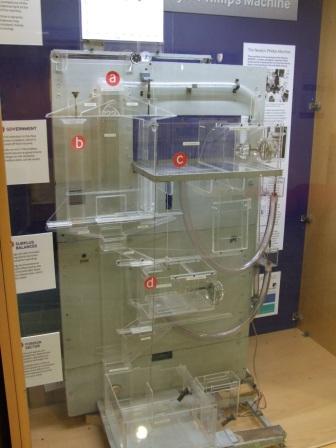 In the machine, water is pumped to the top (by a motor taken from a Lancaster bomber), where it enters the economy as ‘income.’ As it flows down, taxes are first siphoned off, leaving disposable income. From this, savings are then removed, leaving consumption spending. Government spending and investments next reintroduce money, whilst imports and exports move it out and then back in to the main flow, before it all finally ends up at the bottom as transaction balances, ready to start its journey through the economy again.

The rate at which water is removed or added at any point can be artificially set, to demonstrate the effects of specific monetary policies. Moreover, the levels of taxation and expenditure, savings and investments, imports and exports, exchange rate and income can all be plotted against time on graph paper. The liquidity preference function, for example – which is in our ‘Hidden Histories’ display – affected idle balances and dictated the interest rates recorded by the machine.

The Mark I model of the machine was built in the summer of 1949 by Bill Phillips, a student at LSE, and Walter Newlyn, a friend and lecturer at the University of Leeds. Soon after this a Mark II model was devised, and around 14 of these were built and sold to universities and financial institutions across the globe. Although originally developed as a visual teaching device, it could provide useful predictions of the effects of specific monetary and fiscal policies, and was one of the first computers used in economic analysis, helping to resolve a major dispute between Keynesian and Robertsonian theories. It was a pretty important machine in 20th century economic theory, even cropping up in an Adam Curtis documentary!

As Leeds University contributed £100 to the costs of building the Mark I model, it came to the Economics Department here, where it remained a part of teaching for over 25 years. We’ve now put together a display of the machine and a sculpture by Walter Newlyn’s daughter in the Business School, which you can (and should) visit.

This is the first post of our new blog. Hopefully the blog can become our central hub for organising and communicating with each other from now on, rather than relying on group e-mails and scribbled notes.

The blog is public, so anyone can read what we write there. The idea behind this is: it could be interesting, for observers outside of the project, to be able to see the discussions and activities that go on in the development of a (still young) museum. Obviously, this won’t make e-mailing redundant, but hopefully most things can be discussed here. Making it publicly visible may also save this blog from the fate that befell our previous, private blog, which lay mostly ignored over at blogspot.

So, please do subscribe and even contribute posts of your own. Arrange meetings, distribute minutes and present materials here. Use the blog to tell us about the museum work you’re involved in, or to request advice or assistance. And advertise any interesting conferences, archives or projects you’ve come across to the rest of the group. Over time, perhaps, the blog can act as a collective memory for the museum.