The folios of large botanical lithographs held by the museum are educational tools, part of set entitled ‘Botanische Wandtafeln’. They are associated with Carl Ignaz Leopold Kny (1841-1916), who was a German botanist and Professor of Plant Physiology at the University of Berlin. These wall charts were historically European (specifically German) phenomena, which originated with Kny’s idea of displaying them in classroom lecture halls. 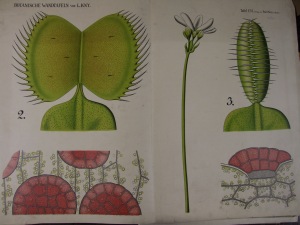 The educational utility of the Botanische Wandtafeln arose as a result of rising class sizes, which in mid nineteenth-century Germany could be well over one hundred students. The importance of the visual in German education was another factor. Thoughts on this subject were strongly influenced by the ideas of Heinrich Pestalozzi (1766-1827). Pestalozzi theorised that children learn by transforming vague sense impressions (or Anschauung) into distinctive ideas. It was therefore important that pupils should see or handle objects, instead of merely hearing about them.

The Botanische Wandtafeln were published between 1875 and 1911, numbering one hundred and twenty plates in all and were accompanied by a 554-page textbook by Kny of the same name. Two printmakers and more than ten artists were associated with their production, which was made possible by the German development of lithography on an industrial scale by the Englemann workshops from 1816. While the production costs of colour prints fell, the Botanische Wandtafeln set was by no means cheap, selling for the sum of one hundred and fifteen dollars in 1911.

The charts depict the anatomical and morphological details of plants in impressive detail. As with our pathological illustrations by Ethel M. Wright, this botanical illustrations are wonderful displays of artistic talent alongside scientific knowledge. Illustrated topics include cell structure and development, insectivorous plants, fern and bryophyte structure and algal fertilisation. Kny, dissatisfied with the existing botanical literature, conducted original research on several topics to properly prepare the charts. The folios held by the museum are unusual, the charts usually being rolled up for storage. Many of the charts are coloured, though a number are in black and white. The Botanische Wandtafeln is considered to be a famed exemplar of Victorian era and pre-1914 Germanic science.

Hello, I thought I would upload my pictures alongside a draft of the script I am writing for the video. I will then expand on this for the display description, so comments on either aspect (video/display description)  will be appreciated. (Any comments regarding the Coco de Mer in the background will not be considered irrelevant) 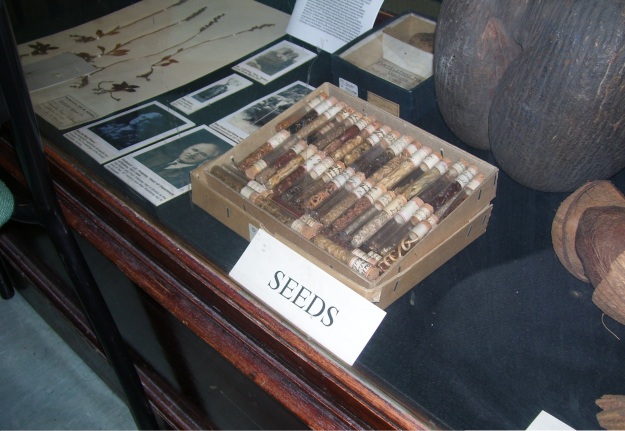 “Leeds was amongst the first universities in Britain to recognise that investigation of plants could go well beyond taxonomic classification. In 1907 it became one of a very few universities to offer a chair of Botany, a position which has since been held by many illustrious names. The first was Vernon Herbert Blackman who is now most widely remembered for his investigation of plant development, particularly how one plant can fertilise another and produce offspring. For this kind of research seeds are themselves important for producing the experiment subjects. However I have principally chosen this item for display in the museum because a well stocked seed collection was really the heart of any Botanical department. Here we see only a portion of a collection that would have run to hundreds of species and varieties, some common others very rare. The vast number of ways in which this collection can be put to work is staggering. Not only can these seeds be scrutinised for physiological and anatomical purposes, but they can form the basis of investigations into inheritance, fertilisation, classification and a whole host of other important biological questions. What is perhaps most interesting however is that there is every chance that one or two of these specimens could still be grown today. Some seeds have managed to germinate after decades or even centuries in storage. It makes you wonder what valuable genetic material might be hidden inside.”

Right then, what do you think? As it stands it takes me just over a minute to say this, going at a slower than normal rate. Have I crowbarred in the ‘hidden’ theme a little too brutally? Also, are we still on for filming these on the 18th?

UPDATE: You can view the finished video on the seed collection at the University of Leeds on our Youtube channel here.

Thanks everyone who came to the meeting on Wednesday, and I look forward to your posts on your chosen objects.  For those of you not there, this is what we discussed and decided, more or less.

All together we now have at least 9 objects for the case: 2 from physics (and possibly another from maths), 2 from botany/ biology/ herbarium, 1 from history of education, 1 from medicine, 1 from English, pieces from the Newlyn-Philips machine and the Astbury camera.  The plan is now for each person who chose an object to tell us about it in 4 main ways: by talking about it on camera for 1 minute, writing a catalogue entry, writing c.500wds on it on the blog and later putting this on the website linked to the catalogue entry.  And finally to reduce all that to a 30wd label for the case.

Everyone seemed pretty happy with the Hidden Histories theme, each pleasingly interpreting this theme in a different way.  The theme can be taken to mean hidden objects and collections but also hidden stories and the hidden history of the university, which it was generally felt, is not celebrated at Leeds as much as at other universities, but is interesting and a potential selling point of Leeds university.

That’s all, please watch out for (or write and post) information on all the objects so far chosen for the case.